How Apple’s iPhone 5c event was covered in real time

At Rock Content, there’s no day like Apple day. Nothing draws the online world’s attention like a new iPhone, and readers demand every iota of gossip, stats and specs–all in real time. This year, so many of our clients ran live coverage that we reached record-breaking traffic levels. Here’s a look at some of the ways media organizations used Scribble to tell this story in real time.

Tell readers what you know

Twitter was a flurry of quips, comments and links, and myriad liveblogs offered a steady stream of real-time information. All of this information can be pretty overwhelming for someone tuning in partway through. Fast Company cut through the social noise with a frequently-updated LiveArticle that included simple headlines and a slideshow of key features, which was the first thing readers saw when they arrived at the page. Both Fast Company and CNN linked to their liveblog from their homepage during the event, giving readers exactly what they wanted front and centre. Very simply and effectively, Germany’s Spiegel-Online highlighted keywords from Phil Schiller’s presentation to draw users’ attention straight to the most important bits. 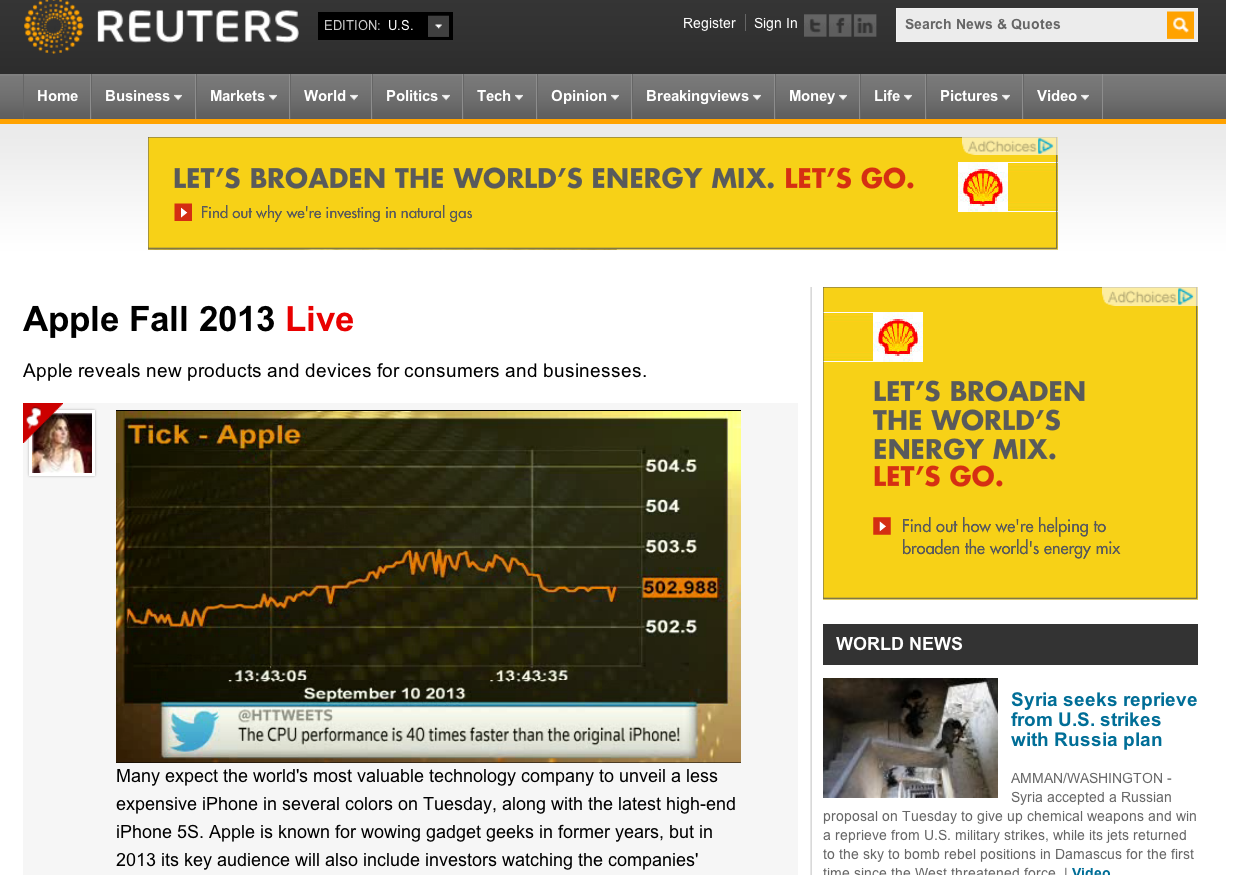 Want to stand out in a chorus of real-time reporters? Know your readers, and deliver what matters most to them. Tech expert CNET focused on the product and its applications, and how it has evolved over various versions. Fast Company included a nod to Apple competitor Nokia’s cheeky content marketing efforts, and Reuters featured a live stream of Apple’s performance on the stock market, allowing investors to see how various announcements moved the meter.

The rumour mill runs full throttle in the time leading up to every Apple event. This time around word on the street was that, come Christmas, gadget nerds would be sporting iWatches. This was quickly squashed, but other rumours–a new camera and new iOS–proved to be true. The best liveblogs gave background information to readers as a starting point, and sprinkled context throughout the event. See: Fast Company’s history of iOS slideshow and SoundCloud documentary, Mashable’s backgrounder linking to must-read articles and CNET’s hilarious live TV show commentary.

Bring readers into the discussion

The Chicago Tribune turned its live coverage into a watercooler discussion with its community. Readers could chime in on points social media editor Scott Kleinberg was making, allowing entire conversations to unfold around particular factoids and opinions. He also encouraged readers to ask questions, holding mini discussions around any points they raised. In this way, Kleinberg tailored his coverage to the things that mattered most to readers.

Mashable, always the community builder, used polls to encourage reader interaction. The editors there also brought in plenty of reader comments, ensuring the social chatter blossoming around the event happened on their site.

Across the pond, Germany’s Faz.net used Scribble’s blockquote feature to pair reader questions with reporter answers into single posts, making  each interaction in the free-flowing conversation socially shareable. It also included commentary around tweets using Advanced posts for German-language translation and to add context from reporters. Meanwhile, Deutshe Telekom made great use of Scribble’s Discussions feature. 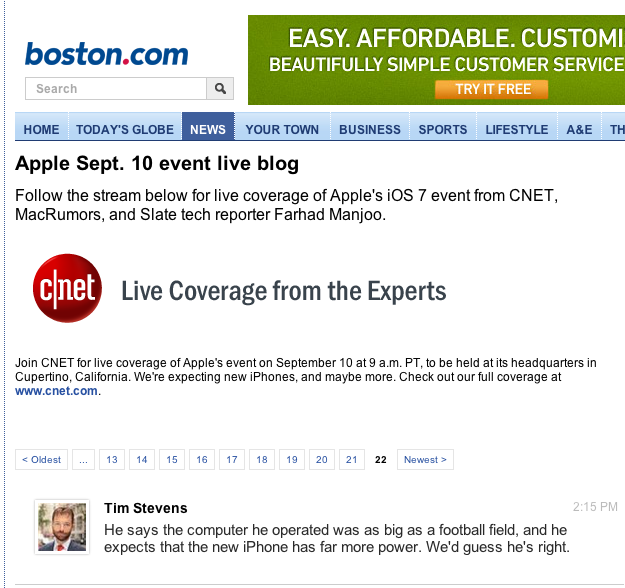 Not everyone gets a press pass to Apple events, or can foot the costs of sending a team to Silicon Valley. No matter. A lot of media companies took advantage of the Scribble Market to add quality real-time coverage to their sites.

Both Fast Company and CNET put their coverage into the Market (think iTunes for real-time content), allowing any Scribble client to host the content on their site for free.

Through the Market, more newsrooms were able to provide readers with coverage they wanted, which prevented them from straying elsewhere. Newsrooms in the UK took advantage of the offer. Boston.com added the coverage to its site, and included updates from other reporters covering the story. The Toronto Star took coverage from both companies while also adding its own voice to the mix, creating a steady stream of coverage powered by three different newsrooms.

This event illustrated the power of the Scribble Market by amplifying one client’s coverage by over 1000% compared to traffic on its own site. That’s a lot more eyeballs than it would have captured on its own.

Want to learn more about the Market? Tweet us @scribblelive and let us know!

9 Common SEO Myths that you Need to Avoid