HÜB: A Space for Visualization

Much of the time, visualization consumption is a solitary activity taking place on the private screens of laptops and smartphones. But sometimes it is good to view visualizations in a social setting. One of the most important factors in enabling this is the venue. Imagine looking for a table where you are not bothering some other party, searching endlessly for a plug to charge your laptop, or having to use a table in a restaurant where your group’s total order is $11 for drinks you sip over several hours, annoying the servers trying to seat higher paying customers. The optimal physical space for viewing visualizations in a social setting should encourage people to gather and discuss. It should not be set up in a way that leaves comfort and networking as an afterthought. The acoustics should be such that people can easily talk at a normal volume and hear each other. A group of three to five people should have the facilities to have a good impromptu discussion and pull out their laptops and iPads to share. Places to plug in a phone or laptop to have a quick charge are essential. The HÜB debuted at the Northside Festival, NYC’s largest and most accessible discovery festival. Hundreds of bands, entrepreneurs, filmmakers, innovators, and over 80,000 fans converge on Brooklyn over eight days to witness the most incredible showcase of “what’s next” in music, film, entrepreneurship, and art. The HÜB is a physical space specifically created to fit all the criteria above, so that it drives social interaction. It is inflatable and portable, the Northside Festival test was successful and provided great data on how it performed and how people interacted with it.

The HÜB is focused on flexible and removable seating, with large tables for groups to talk and share, easily accessible power outlets, and fast free Wi-Fi available through Clear Wireless. 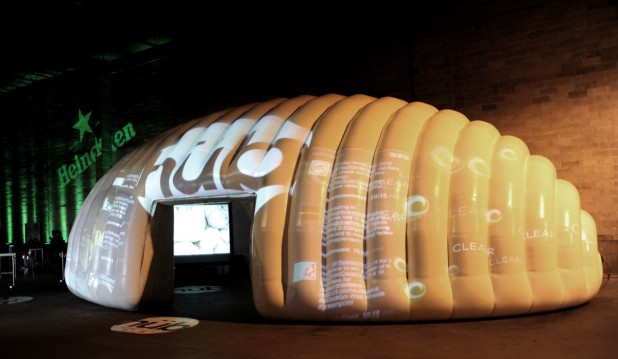 With this baseline environment established, The HÜB can enable much better interaction with visualizations and communications of data. By projecting on a unique organic surface, and creating a “fun” space, The HÜB helps people open up to each other and lowers social barriers. In the end, whether you are projecting on an organic structure like The HÜB, a conference center wall, building, or broadcasting, the data visualization still has to enable quick time to share insights and facilitate a dialogue. 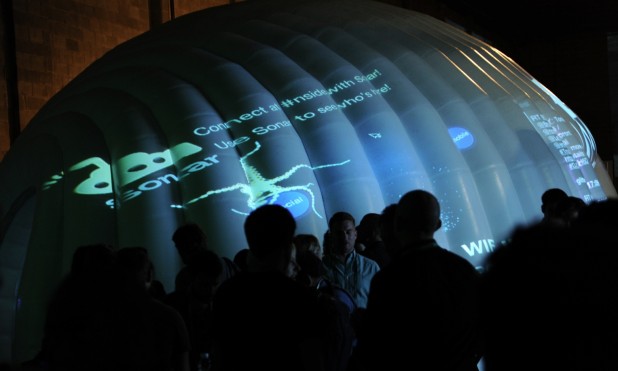 One of the specific physical issues The HÜB faces is the amount of ambient light and location of the projectors. The large HD projectors that need to be mounted 15′-18′ above the floor to wrap the structure can have problems competing with bright lighting in some venues. There are several ways to address this; using a truss or flying them from the building structure, or developing custom mounts to adapt to the existing physical constraints. Another projection option to drive traffic towards the pod is a series of white 5′ The HÜB decals. These are applied to the floor and can be projected on to indicate to groups with specific interests to gather at a specific color or icon on The HÜB. 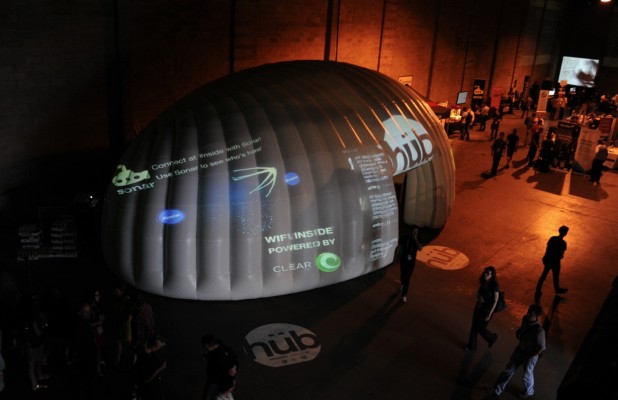 Much of the inspiration for developing The HÜB was the idea of being able to help curate interactions and foster new relationships. With some displays people will tend to gather, look, possibly interact, then take a photo and share it. They do not prompt a dialogue with the people who are in each other’s near-field. How much more meaningful is it to talk to someone next to you about what you are experiencing than to find out that someone was looking at the same thing you were a minute or a week later? Designers need to always be conscious of the stewardship they possess and to use it with grace and tact. They can ask insightful questions: How does this make you feel? Do you better understand the scale of this story (data)? Do you think you could help someone here better understand the meaning? Why would you want to share this? By asking thoughtful open-ended questions, designers encourage a dialogue to bloom.

There are several ways people interact with the content on The HÜB, the most engaging and and dynamic is to talk to the crew in the cage. The cage is an accessible area from which The HÜB is controlled. The staff at The HÜB are skilled at social connections, pattern recognition and trend spotting. They create real-time visualizations and data interpretations that deliver value to the attendees. Through a partnership with Sonar, people can do real-time location based networking. The HÜB can interact with and alert people that there is someone they really should connect with while they are in the vicinity. The HÜB also mines Twitter traffic for realtime geo-tagged data. The HÜB team is developing networked Kinects to allow people to physically interact with the data visualizations and have an engaging experience. When two people with different heights stand next to each other and they each represent a different data set, then realize that their head represents one variable, their hands another and their position yet one more, you see them really dig into data exploration in a very natural way. Moving closer expands the time scale to explore micro events, moving back zooms out for the macro view. This physical interaction encourages social engagement. The HÜB is all about curating connections and interpreting valuable data.

Observations After a First Pass

People like the object quality of The HÜB. They come right up and touch it, lean on it or walk inside. It is a fully pneumatic structure, so it feels a bit alive on its own. It actually breathes with the inflation system’s cycles. Using a very natural organic shape does not allow for traditional boundaries of screens, so there are no corners or bezels to worry about. The entire structure can be wrapped with visualizations or sections for interactive storytelling can be called out. The most effective behavior seems to be morphing between a few of these “scenes” in real time as the context of the event changes. The HÜB is also reactive to ambient sensors that can be mapped to variables, such as temperature, time, motion, proximity and the like. It is just a really great data canvas. 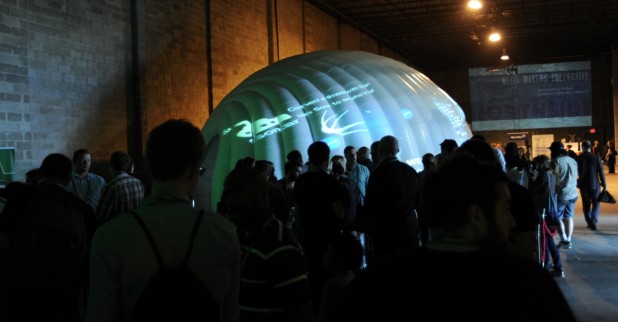 Another observation was that many people wanted to do something in The HÜB: press conferences, product launches, or just hanging out and having great discussions. For other versions, larger spaces and other bespoke shapes that fit site specific installs are both possibilities. Since launch, there has been interest from as far as Jordan, Greece and Qatar, as well as many US-based events. The main challenge now is event priorities, scheduling, sponsors, and specific content development. Collaborations with a few data artists such as Scott Garner, who has developed Tweetopia as a Google WebGl experiment, and Eyal Ohana, who explores the use of code and custom written software to generate living and responsive animations were both successful. Further collaborations are in the works.

The HÜB was used in a very different context for a traveling science exhibit on product testing; it was designed to withstand 80 mph hurricane winds and has multiple coverings to allow some transmissive light, or so the outside light can be blacked out like a planetarium. Another possible use is for a mobile emergency clinic for disaster areas, like Haiti or Fukushima. It can be shipped on a pallet with a generator, satellite internet, and be fully inflated in 15-20 min, giving temporary shelter, power and communications.

Giving it a second life as The HÜB has been a great experience, seeing how an object can truly transcend its original intention. Ideally, The HÜB would be much larger. Currently it is at 50’x 30′, however football field sized installations and larger would be great. The organic structure is going to be an important part of any future pieces.

In addition to showcasing visualizations available on Chrome Experiments, The HÜB also showed custom Twitter stream visualizations, had original content from Sonar and developed many realtime vector and 3D images on site as stories dictated. Some HD content was blended to create seamless backgrounds and give context to the event. A custom display system was developed to display all of the data dynamically in real time, seamlessly across three or more HD projectors, without being limited to using rendered content only. Sitting in front of the whole system after it was installed and testing began was a fantastic moment of play and discovery.   Peter E. Raymond is a creative, technical, and business strategist. He is currently CEO of Human Condition an innovation, R&D, think and do tank, as well as ÜBERANGST a design, production and app agency. He consults for global institutions and was recently a Senior Fellow at Thomas Jefferson School of Population Health.

What is a Perfect Blog Post? Example + 5 Steps to Create One

How to add a favicon to your WordPress website?