Humor is a fickle thing. One person’s laugh-out-loud joke is another person’s head-scratcher. Some people strive for the perfect pun, while others would rather choke on their punini, pun fried noodles, or pun seared scallops than debase themselves with wordplay. What makes a kid laugh uproariously may make an adult groan, and what makes an atheist giggle with glee may make a fundamentalist cringe. Finding that humorous sweet spot is no easy task. In infographics, it’s particularly difficult — especially when the humor plays second fiddle to the narrative message and its supporting data. But some infographics manage to accomplish this Herculean task: deftly balancing data viz and levity, silly graphics and a strong narrative. Others focus solely on the funny, aiming for entertainment and squarely hitting the mark. Here are some infographics to tickle the funnybone, along with color commentary on what makes the good stuff work.

The flow chart is a popular format for humor infographics, perhaps because it lends itself to short, pithy one-liners. It’s like those old Choose Your Own Adventure books: you don’t know where you’re going until you get there. It’s also like fashion magazine quizzes: irresistible because they tell you something about yourself. But silly flow charts are so common – from the social networks to the pages of Maxim – that they can fall flat pretty easily. Too many corny jokes and a viewer’s groans outstrip her chuckles. Still, like with any comedic form, when this one is done well, it’s hilarious. Take the example below. It’s a meta flow chart about flow charts. Meta humor always has a leg-up on its straight-laced regular humor counterparts: it’s a joke before it even gets started.

Are You Good at Following Flowcharts? infographic by CollegeHumor.

Nerds, geeks, IT techs and related folk are a big audience for the humor category on Visual.ly. Technology-based knee-slappers abound, as do geek genre infographics about things like Star Trek and Lord of the Rings. Take, for example, the infographic below, “How Working in Residence Life is Like Living in the Star Trek Universe.” (Click on the link below the image to view a larger version.)

How working in Residence Life is like living in the STAR TREK universe infographic by jessfaulk.

Comparisons are also popular in this niche: comparing geeks to hipsters, for example, or geeks to nerds, or geeks to uber geeks. Many of these infographics are delightfully quirky, engagingly fun, and lovely to look at, but most aren’t laugh out loud FUNNY. The funniest infographics in this general tech/geek category tend to be aimed at a larger audience. For example, the infographic below, “What to Do When the Internet Is Down,” is definitely tech-related, but it appeals to geeks and non-geeks alike.

What To Do When The Internet is Down? infographic by GlitchAgency.

Humor thrives on juxtaposition: the comparison of different sorts of information in new ways. For this reason, venn diagrams offer a particularly rich opportunity for laughs. They are an easy visual tool for highlighting what hilariously disparate things have in common (or don’t). Besides, those little segments where the circles overlap are the perfect spots for punchlines. Here are two examples of very funny venn diagrams at work.

Everybody loves zombies, and, despite how frightening they can be, they are also somehow innately funny. Maybe it’s the ridiculous way they walk, their weird moaning, or their reputation as the schlocky horror go-to creatures of Hollywood. In any event, zombies, the zombie apocalypse, and related genre infographics are both popular and, sometimes, hilarious. Here are some zombie venn diagrams: two great tastes that taste great together (like brains and brains).

Sometimes the 9-5 needs a little dose of hilarity… okay, all the time. Having a sense of humor about your job makes frustrations manageable. The best workplace humor infographics make light of the worst things a job has to offer: the long hours, annoying clients, and the potentially soul-crushing tasks that break the will of the worker who takes himself too seriously. The great thing about workplace-related infographics is that not everyone needs to get the joke. As long as the target audience appreciates the humor, professionals will share it with their peers and the infographic will be a success. In most cases, workplace humor is of the funny-because-it’s-true category, like in the infographic below: “A Day in the Life of a Graphic Designer.”

A Day in the Life of a Graphic Designer infographic

In order to get the following infographic, you need to know that Edward Tufte is an American statistician and professor emeritus of statistics and computer science at Yale. He is also a pioneer in the field of data visualization.

Which of the 3 Types of Data Storage is Best for Your Business?

Bad Customer Service: Examples + How It Affects Your Business 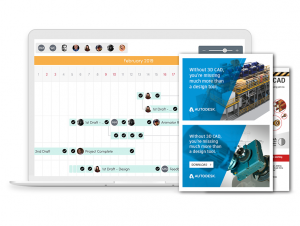