While a large amount of these j-school spotlights have been on post-secondary journalism programs, high schools are emerging as a place where budding writers can get their start. While some programs offer English and Writer’s Craft classes as part of their curriculum, El Estoque is taking it a step further.

The publication is a project undertaken by students of Monta Vista High School, a high school embedded right in the heart of Silicon Valley. It shares its city, Cupertino, with the biggest technology company in the world: Apple Computers.

El Estoque used Rock Content during the first and final United States Presidential Debates, producing their own coverage in real time. As many events (like the debates) are being streamed over the Internet in real time, they did not need to have a reporter physically there to cover it; this is eliminating many of the barriers young journalists once faced in terms of access.

“We focus heavily on localization- our audience isn’t going to come to us for political coverage that they can find elsewhere,” said Anushka Patil, one of the editors-in-chief for the site. “So more than ‘necessary,’ it was just a matter of covering the debate in a way our readership would respond to and be engaged in.”

“Students were already using social media to chime in as the debates were happening (on Facebook and Tumblr; Twitter isn’t big at our school) and we wanted to centralize that discussion.”

El Estoque did just that, posting updates about the debate itself while allowing readeres to post their own observations. They also brought in tweets from respected sources, filling in expertise gaps in their coverage with trusted names.

And, well, the occasional meme showed up, too.

“I think the debates have a certain amount of ‘pop culture’ value, if you will, so an open forum like this lets people join the conversation whether they’re talking about the entertainment or politics aspects,” Patil said.

IaaS vs PaaS vs SaaS: What is the Difference? [+ Examples] 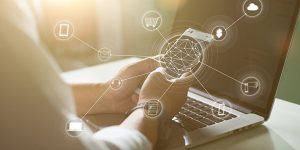 Is Account-Based Social Selling Right For Your Sales & Marketing Team?

International Content Marketing: How to Strengthen Your Brand in Foreign Territories?

Everything You Need to Know About Weddings in 14 Infographics