What do the NBA Finals and App-like Digital Experiences have in common?

The NBA is pulling out all the shots with their marketing campaigns. And what's even better... they're using marketing apps to do it. Incredible marketing tactics AND app-like experiences? It's almost more exciting than the Heat being in yet another Eastern Conference Finals spot! Read More.

Ah, basketball season–this girl’s favorite time of the year (I would say football season is, but I’m a Jaguars fan… Need I say more?). Now before I even get started telling you how the NBA and the Miami Heat kill it at the marketing game, let me just say: I was born in Miami, raised in Fort Lauderdale, and have been wearing my Heat jersey proud since ’88. So none of this bandwagon nonsense all you haters want to start hurling my way.

Ok, back to our marketing lesson for today. The NBA has always been incredible with their marketing. From partnering with other brands such as Universal and Sony to utilizing social media like no other sports association does, the NBA turns heads season after season.

This season is no different. The NBA is pulling out all the shots with their marketing campaigns. And what’s even better… they’re using marketing apps to do it. Incredible marketing tactics AND app-like experiences? It’s almost more exciting than the Heat being in yet another Eastern Conference Finals spot!

If you’re a Heat fan (or basketball fan at all and don’t hate the Heat for whatever reason), you’ll know this feeling I’m talking about. Since LeBron’s arrival to the Heat, he and Dwyane Wade have been unstoppable with the assists. It’s always such a good feeling, especially when it’s the game-winning shot. Being a marketer, I get the same feeling when I come to a web page and see an incredible digital, app-like experience in front of me. Put the two together and it’s like the pass to reverse layup for the winning points the brand was hoping for!

Combine app-like experiences and the NBA and you’ve got this girl hooked! Take NBA’s TNT Overtime voting app for example. Voting on which players to watch on the Player Cam and which team every state is rooting for, the NBA and TNT partnered to create an interactive and engaging experience to bring awareness to TNT’s Overtime.

Now I won’t go into how lucky Gabrielle Union is, or how pretty she is, or how she’s married to one of my favorite NBA players of all time… Ok, ok, I’ll stop there. Dwyane Wade is a powerhouse all his own. His site lives up to that title as well. DwyaneWade.com incorporates parallax and continuous scrolling, along with embedded videos, bringing an extraordinary app-like experience to visitors.

This one may not be as detailed as the others but still impressed me. SBNation created their own 2014 NBA Playoff Bracket site. With an interactive bracket linked to each team’s SBNation community page, visitors were able to interact with the bracket as the playoffs progressed. Let’s just hope that empty middle Finals spot gets decorated in Miami Heat colors soon!

MarketingProfs always manages to release some really interesting articles but one of their most recent ones really caught my eye: LeBron James’s Five Keys to Marketing Success. Talk about an article written perfectly for a girl like me! Josh Haynam talks about the keys to James’s success:

There’s a reason LBJ is considered one of the greatest basketball players of all time. There’s also a reason the NBA is known to have some of the most engaging and extraordinary marketing campaigns. Your marketing must have focus, continuous hard work, and usefulness for others.

Take a page from their book and start working on improving your game. What can you do to sink those three-pointers? Are your digital experiences on the path to the championships with marketing apps? 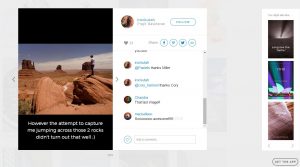 Keyword Difficulty: This is How you Determine it to Favour your SEO strategy

The Importance Of Business Data To Organizational Performance