From Creating the Silent One to Visualizing Endangered Species

Editor’s note: Guillermo Munro “memuco” is an artist and animal lover. He recently caught our attention with his amazing “Endangered Species” series: a collection of infographics that are both beautiful and informative. Here, Memuco tells us the story behind the collection, which has been featured by WWF and China Daily, among others, and was a finalist in the Information is Beautiful awards.

I am a painter who loves doing graphics and illustrating them. Some call them Illugraphics. I like the idea of combining beauty and data: if you depict in your illustration something beautiful and correct, it becomes information and it balances out the heavy data. And I have always been interested in animals. (At some point I wanted to be a veterinarian, then a zoologist… but I am horrible at math.) One day, in 2006, my girlfriend at the time brought in an issue of Time magazine, with a polar bear on a piece of ice, and the title “BE WORRIED, BE VERY WORRIED.” It was an eye opener. In my house, we have been environmentalists all our lives and I’ve always made an effort to stay informed, but that magazine made me realize that shit is happening now. I went into overdrive, I could not believe that we where going to lose the polar bear! So I jumped into polar bear mode and painted like crazy. In the summer of 2008, I moved to Dubai to work for Gulf News. There, I pitched a series of infographics showing the most endangered species. Between all the designers, illustrators and graphic artists, some of us did two or three, or finished the work of others. We travelled to Sharjah to talk to the scientists at the Breeding Centre there. The scientists were always helpful and provided us with great information. Not only did we get to create the series, but the Breeding Centre went from a few hundred visitors a week to thousands. That was beautiful. We won SND prizes with the series.

After three years in Dubai, I moved to Beijing to work for China Daily. Being there was pretty hard the first months, but it was amazing and incredible, too. In October 2011, I started to paint The Silent One. This was a story I invented about the offspring of Catrina (or Lady Death) and El Nahual, a powerful being in Aztec mythology that could shift its shape into different animals. So, of course, this little girl has much love for animals and connnects with them very easily — but her mom gave her the mandate to go out and “put to sleep” every last animal of the most endangered species. The mandate also included that she had to play with them and make sure that when put to sleep, these animals where happy and full of love. There was nobody better for the job than her daughter. But for every animal she put to sleep, the daughter would cry. She would make no sound; only tears would come down and leave black streaks on her face. The Silent One. 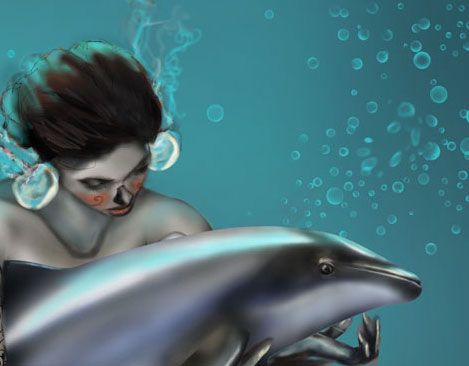 In November 2011, I saw the headline “Western Black Rhino declared extinct.” I was in shock. So I did a lot of sketches, mostly of the silent one, but also a lot of research.

The graphics were going to be small and very very simple, just an image and status and numbers left. And that is how I started. But then I got more involved and realized that there was a lot of info I needed to put in there that was important, so some graphics got big, very big.

I am in the process of making them simple again and having them serve their purpose: tell the facts, move to the next one.

The Killing fields of Ivory infographic by memuco.

I contacted the offices of the WWF in Beijing and met with them. I proposed to do graphics on ednangered species and we did three in 4 to 5 months.

In February 2012, I participated in the White Canvas Project in LA. I painted in 798 at an environmental event for Greening The Beige (a group that tackles environmental issues creating art). I was nominated by the Design Asia Awards for my graphics at China Daily. At the competition for Information is Beautiful, I was part of the last round with the rhino graphic, which made me very, very happy.

And WWF published my two graphics on tigers on their website.

When I saw that, a tear came down, I couldn’t help it: it was a beautiful moment too see so many months of work and not sleeping, finally up there.

Is Boosting your Page Authority a Good Thing for SEO?

Apple Cost Social Media $10B: How The Shift In Privacy Is Changing The Marketing Landscape