Now, Facebook (sorry, Meta!) is giving signals it will soon abandon one of its most famous “inspired” tools: Stories. That was an idea that Snapchat developed first in the middle of the last decade, and Zuckerberg’s company decided to include it in all of its services without paying any rights to the other organization.

Since 2016, like Snapchat, you can post 15-second videos that disappear after 24 hours. Now, the company confirmed that it will soon be possible to post 60-second videos on Stories—the same as Reels, another “inspired” Instagram feature (now from TikTok).

The news comes in the same quarter as Instagram decided to close IGTV. Of course, as is tradition, the company that aims to make a “revolution” with its metaverse was not so original in that case. Posting long videos looks a lot like YouTube, doesn’t it?

A curiosity: before acquiring Instagram for U.S. $1 billion in 2012, the company was already a giant and started to develop a mobile app that would empower users to post photos with filters.

Does it remind you of something?

“We placed a lot of new bets [in the app],” said Adam Mosseri, head of Instagram, to The Verge at the beginning of the year. According to him, “most people” don’t know the difference between videos posted on Instagram and IGTV, for example. “We have to go back to our focus on simplicity and craft.”

Until some time ago, just for videos, you had four ways to post on Instagram: Feed, Stories, IGTV, and Reels. All of them were “inspired” by some of its competitors. The photos, something that was the core of the social app from the beginning, are still there, but it’s not as important for the company as it once was.

Mosseri declared in June that the service is “no longer a photo-sharing app” when explaining video plans: “Let’s be honest, there’s some really serious competition right now. TikTok is huge, YouTube is even bigger, and there are a lot of other upstarts as well. People are looking to Instagram to be entertained, there’s stiff competition, there is more to do, and we have to embrace that.”

That’s going to make Instagram change radically, according to specialists in outlets like Social Media Today. Closing IGTV was the first step. Now, let’s turn to Stories, which are very similar to Reels. Mosseri has already said that’s not making him “happy.” Now Stories might have just one purpose: merge them to offer a simple tool for full-screen video and an almost infinite feed of entertainment content to scroll. Like what? TikTok, of course!

Instagram has changed many times. Its logo, in the beginning, was a Polaroid photo camera, for instance. But when the head of the product says the once primary function of the app (photos) is not important anymore and talks specifically about TikTok (we already know they failed when trying to compete with YouTube), what do you expect to happen?

So, when Mark Zuckerberg had the strength to fight big companies, he looked for other social media services like MySpace and Snapchat, not YouTube. YouTube was acquired by another giant, Google, and had its strategy to maintain its reign in videos.

Lately, Facebook has tried to compete with YouTube. In 2018 it launched IGTV, an Instagram tool for long videos, saying that it was “the future for video.” Facebook failed and ditched it last October, and the company was no closer to being a threat to YouTube.

But, since Facebook surpassed MySpace in the number of users in 2009, no other social service has gotten as close to the public of its brands, Facebook and Instagram, as TikTok has. Don’t think about Twitter—from whom Facebook got “inspiration” for its timeline, or LinkedIn, which copycatted the Facebook feed. These two social services are still for niches.

What makes TikTok even more impressive is the speed of growth. As we see in the graph below, it took almost nine years for Facebook to achieve 1 billion users; for Instagram, almost eight years; for TikTok, just five years.

There are some other issues. Facebook has been facing polemics for about two months since internal documents from the company went public and showed their executives knew that its services were causing problems with mental health, democracies, and even stimulating wars.

Instagram will testify before the U.S. Senate next month after The Wall Street Journal published internal research showing that one in three girls think Instagram makes body image issues worse and that the social app is causing anxiety and depression.

The company knew about these problems and, apparently, did little to help its users, thinking more in profits than in public well-being. Because of this, fewer and fewer people trust the company, research shows. Facebook was the least trustable social company in earlier years’ research. And, after that, this number decreased even more.

More than that, Facebook services are facing a decrease in usage among young people. Today, 63% of Americans between 12 and 17 years old use TikTok. Among them, just 57% use Instagram, according to Forrester’s research.

Why is it a problem? Historically, young people are responsible for trends and are more engaged with social media. If they are not there, people of other ages might start to look for other options that are more cool and trendy. To stop this, Instagram is trying to turn into TikTok.

What should marketers do?

First of all, let’s talk about video. If you still think that video is the future of the internet, please, change your mind. Video is not the future; it is the present! According to Cisco, video will be responsible for 82% of internet traffic next year. So, if you have not started to invest in it yet, you are late.

Do you need to be on TikTok? Be cautious here. Before you decide, you need to look at your brand persona. Is your public there? Do not follow trends blindly. It’s not just TikTok that is growing. YouTube continues to be huge. But you have other options. Spotify is growing a lot with podcasts, for example. Again, do you need to be there? Ask your public. You need to be where they are!

If you are very dependent on Instagram, should you be worried? The answer is yes. First, the social media app is changing its core to bring in young people. So, maybe your public that loves vintage photos on the feed will look for another place like Pinterest, for instance—which continues to grow as a niche service and has more users today than Twitter.

Here is another thing. Instagram was successful in slowing down Snapchat in the past by copycatting it. But the same did not work with YouTube. Yes, the company has lots of money. But MySpace, which sold to News Corp. during the height of its popularity, was also surpassed by Facebook.

We had another similar worldwide case. The major countries in social media usage are the U.S., India, and Brazil. In 2004, Google launched a social media service called Orkut that just Brazil and India embraced. It was huge in these two countries, with almost 80% of internet users using it. But, six years later, Orkut started to decrease, and Facebook surpassed it.

Why? No one wants to stay where you cannot interact with your friends. When young people start to use another service, soon, other ages begin to discover it. Then, as many people begin to embrace it, their friends start to change as well. So, we have a massive migration.

Is it going to happen to Instagram? I can help you with some historical data, but I can’t predict the future. As Instagram did with Snapchat, It has the chance to succeed against TikTok. But TikTok is a lot bigger today than Snapchat has ever been. So, I can say to you that if you depend a lot on Instagram, it’s risky to continue this strategy.

Maybe, Instagram will succeed now. Who guarantees the same in the future? It’s really important to diversify your branding and acquisition channels. I’m not just talking about social media.

Look for other social channels, but guarantee a great experience on your website and blog, for example. It’s also important to have your own contact list of people interested in what you sell. Then you can send them emails whenever you want without relying on third-party environments.

Don’t trust in just one tactic or source of traffic and acquisition. With a diverse strategy, your business will be safe!

And, of course, if you want to be on top of the main Digital Marketing’s topics of the week (and how it directly affects your brand and strategies), I invite you to subscribe to our newsletter below and receive it weekly, straight to the point, right on your inbox. 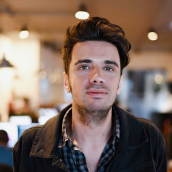 Learn How Working with Freelancers Can Benefit Your Brand Goals

Process infographic: how to make one, examples, ideas and tips