The Fine Line In a Gray Area: When to Use Line vs Area Charts

Line charts are good at showing multiple different series and comparing them against each other. They can support up to about seven lines in a static version; interactive versions can go higher.

Area charts are not as good at comparing that many areas because they have problems with occlusion.

In the example below, the line chart lets you see where all the lines are at all points, but the area chart has hidden parts.

These differences are mainly due to one simple change. Area charts show a filled area below the quantity line. This fill can obscure other data series that are on the same chart.

One way to solve this occlusion problem is with transparency of the areas. Transparency works well with two or three different areas, but if used with too many areas, it turns into a muddy mess.

Because of this potential for occlusion, one frequent thing to do with area charts is to stack them. This is where part to whole relationships come in. The total vertical of a stacked area chart shows the whole, while the height of each different strip shows the parts.

The filled area below the line can help to indicate that it is a physically countable amount, rather than an intangible rate. If used carefully, the interplay between rates and quantity can be represented very well with a combination line and area chart.

William Playfair does a great job of this in Exports and Imports to and from Denmark & Norway from 1700 to 1780. The lines in this chart represent gross imports and exports, while the areas between the lines represent net values. The relationship between the lines is what really matters in this chart, so he calls the areas out with labels and colors. 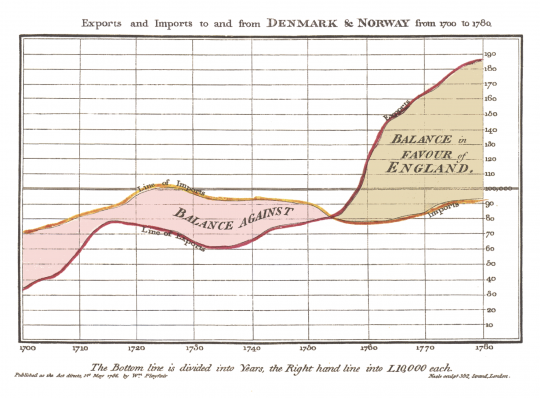 In short, while line charts and area charts may seem interchangeable, they have different qualities. Using the correct one is a subtle move, but it can make a big difference in the professionalism of your visualizations.

First, second and third-party data: what are the advantages of a data strategy

Comparison infographic: what it is, best charts and how to make one