The Maps Are Art

The Map As Art, an exhibition at the Kemper Museum of Contemporary Art, fortifies what many artists and data visualizers have long known: maps are art. In their quest to transmit geographical data, maps borrow from and inform traditional art, all while employing a similar — if usually more constricted — process. The Kansas City exhibition takes its title from the eponymous book by Katharine Harmon, its curator together with museum Director and Chief Curator Barbara O’Brien. The Map As Art features more than 30 large-scale maps by seven artists, completed in varying degrees of abstraction. Maps are loaded — with boundaries, travel, conflict, treaties, distance, data — and, though they’ve been treated ably over the years, they are rife for more artistic consideration. The exhibition could easily accomodate a wider breadth of artists. Still, for a small museum, the variation in style is admirable.

Here, Tiffany Chung recreates maps of cities using embroidery and grommets. The over-under stitching provides a human touch to  lifeless boundaries like the Berlin Wall. In Robert Walden‘s distance shots and closeups of the same maps, he takes cues from maps around the world to create new maps of places that don’t exist—but look like they could. The ink and gouache diptych series “Ontological Surveillance Maps” demonstrates that we’re so accustomed to the language and lines of maps, that the places they represent can be irrelevant. The centerpiece of the exhibition is a walk-in sculpture by Joyce Kozloff. Museumgoers enter a towering patchwork globe that represents in acrylic the 24 countries U.S. warplanes have bombed since 1945. The experience of talking within the center of the structure is isolating and boomingly loud—perhaps not unlike the attacks it represents. Overall, the exhibition demonstrates how maps  have so saturated our visual language that they carry meaning — with or without a corresponding place. The Map As Art Through April 21 Kemper Museum of Contemporary Art, Kansas City, Missouri Rani Molla has a digital media master’s degree from Columbia Journalism School. She’s a journalism reader, writer, photographer, videographer, data visualizer and general doer. Follow her on Twitter.
Share 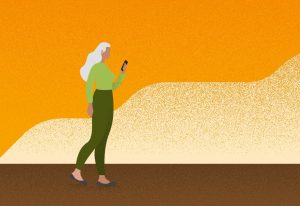