The relationship between food and content consolidated over time, and expanded into a whole new realm following the launch of Instagram. There was a time when food lovers and food bloggers used to gather solely in the Great Realm of Instagram. At the time Facebook had not even acquired Instagram, though the new platform rapidly became one of the fastest growing social channels on the web.

As Gene Tiernan wrote in an article titled The Digital Recipe for Marketing Food “food is experiential.” According to Tiernan, the food experience constitutes an innate push to share insights, reviews, and other valuable content across social media to provide useful information for social networks. “Food is inherently social,” according to Tiernan.

A significant number of Scribblelive clients, recognizing the experiential and social phenomenon, created their own content experiences about food in all its forms. These cases are as diverse as the colourful tastes of Dubai, the world class chefs and nutritionists within Australia, and also the exquisite experience of one of Italy’s greatest chefs.

This tour will explore global examples and identify 10 strategies used by food buffs to create streams of food related content that were then shared across social media.

The agency Kenna part of MDC Parters, created their own content marketing experience on the website Oetkernews. The website’s server is based within Canada, and maintains an English version and a French version of all curated content.

Utilizing Rock Content technology, Kenna created an ‘Engagement Hub’, an online meeting place that provides consumers with information about Dr. Oetker’s latest products and latest trends. The Hub includes metrics that gauge how many people visit the site, how much time they spend online, and the most important information sought by those visitors.

Kenna pinned every one of the tour festivals on an interactive map. 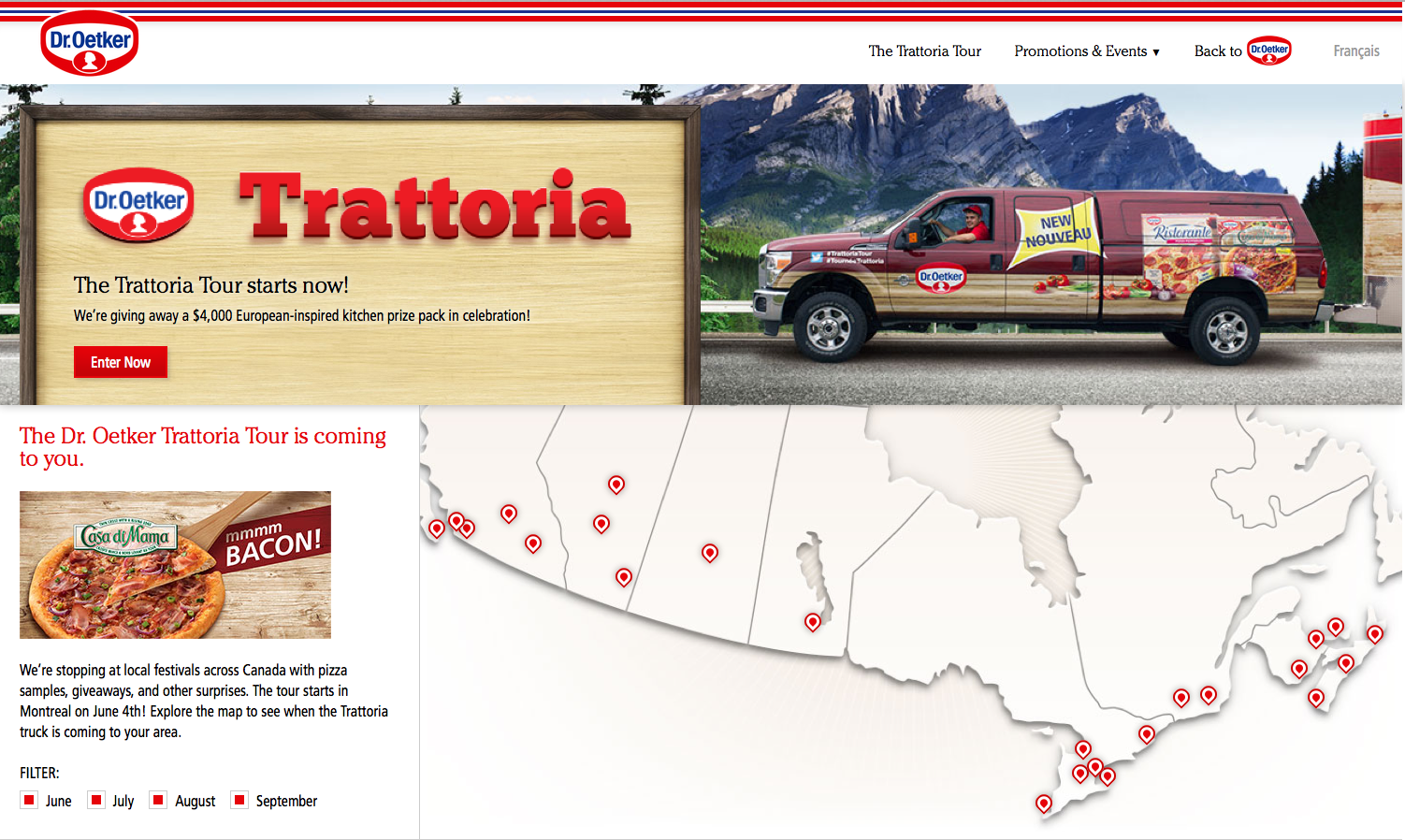 The website is enriched with multiple content experiences with particular attention paid to the individual festival’s page. When the audience clicks on one of the locations on the map, they are directed to a dedicated webpage which contains:

a poll about the overall experience

The focus of the Trattoria Tour is the festival experience. However, the foodies are provided their own treats. Every week a slideshow is published with new recipes in the OwnYourSweetTooth section. Users with their own recipes are also invited to share them on the main social networks. The next stop on the journey brings us to the United Kingdom and the social community named Iceland – not the country. Iceland is one of the most famous brands in the frozen food market. Part of Iceland’s strategy is an emphatic focus on social media engagement. The best discussions occurring on social media channels are displayed in a pinboard published on the community webpage Get Social! The winter season in Dubai finishes with an event called Taste of Dubai. Local and global food brands join the fair, open their own stalls, and promote their foods to the public. It is very common to see live cooking shows where attendees can acquire free food samples. One of the most famous restaurants in the region also opens a pop up venue during the fair, providing a unique dining experience. Nestlé Maggi wanted to create a live experience in its stand. A pinboard was displayed for the duration of the entire fair, encouraging the audience to share its own pictures. A member of the Scribblelive team enhanced the live coverage by uploading videos and images accessible using the mobile app. The Maggi team moderated the content from the backend to create a harmonized platform of published content and user generated content.

4 – Include Readers in the Coverage

“How exactly is the Andalusian octopus cooked?” “What are tonka beans?” Most importantly, why Her Majesty, Queen Elizabeth II was spotted in the north-east of North Rhine-Westphalia, Germany? These are just some of the questions that the editors of the German newspaper Mindener Tageblatt answered during their liveblog of the local food festival Gourmetmeile. The audience played an essential role in the coverage by updating the stream with their own food reviews as well as pictures of attendees in costume. Prior to the festival, the editorial team invited users to submit pictures, tweets, or videos using the hashtag #mindenroyale or with a dedicated email address, which was directly funneled in the moderation queue. 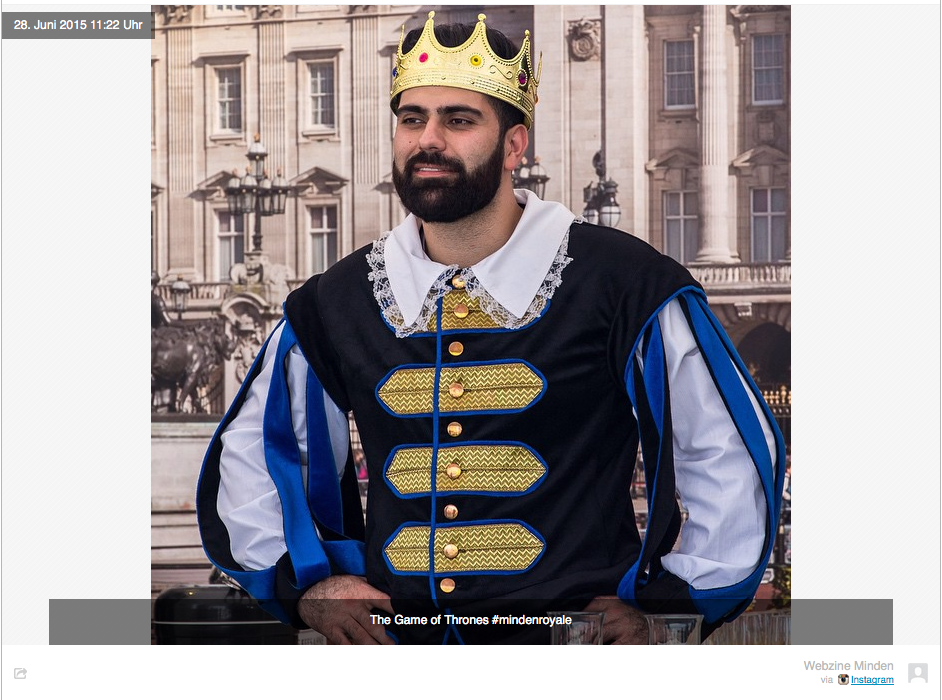 Star Tribune – Food critic tastes all the new foods at Minnesota State Fair, and tells all

Food is not a joke. In some cases, it is considered a sport. That is the impression provided by Rick Nelson, food critic of the Minneapolis based newspaper Star Tribune, who tasted more than 50 new foods in less than 24 hours. His twitter diary was accurately updated in the whitelabel of the newspaper to preserve the marathon through history.

6 – Organize a Live Chat with a Celebrity Chef

In 2014 Australian newspaper PerthNow launched a campaign called Get Active Get Healthy on its weekly insert The Sunday Times. Numerous celebrities were invited to take part in online Q&A sessions as well as food lovers, fitness nerds, and health conscientious foodies through various live chats. One of the participants was Chef Anna Gare, who responded to questions submitted from the front end of the stream using her ability to moderate from the back end. 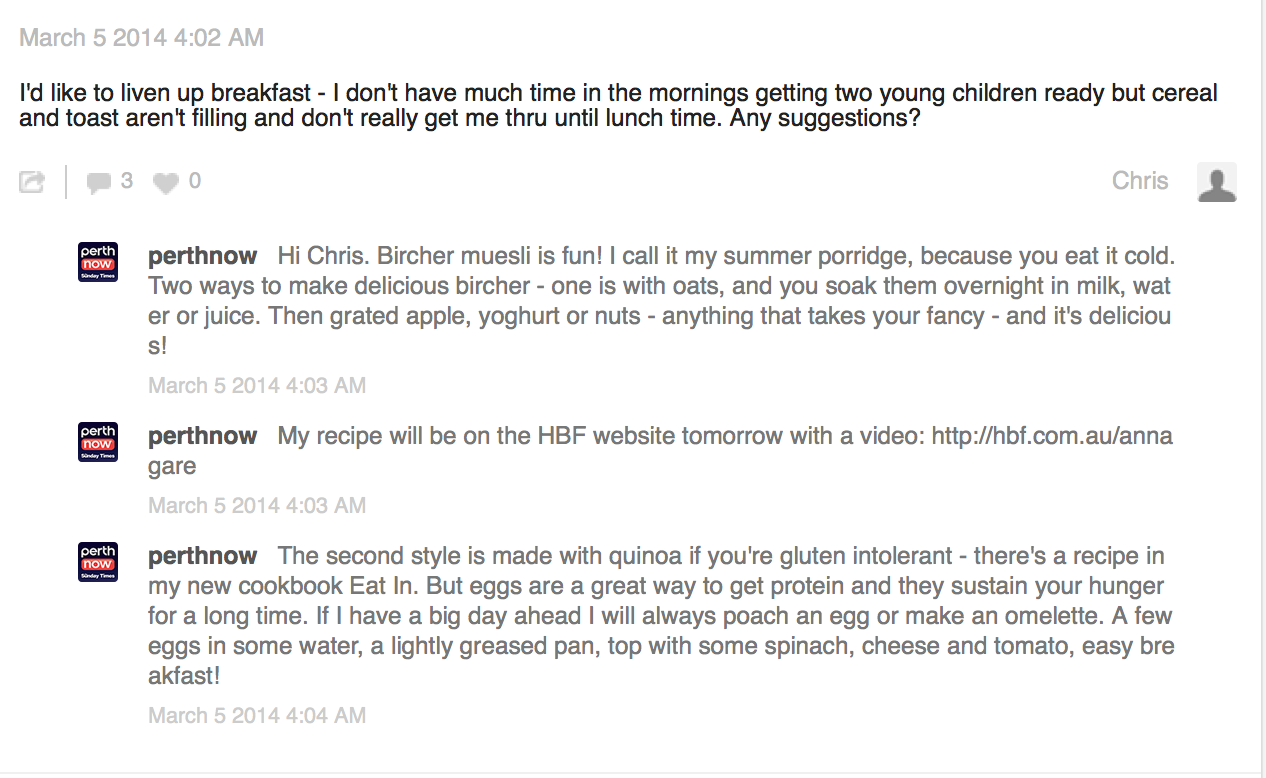 Let’s go back to Germany and talk about plum cake. T-online’s Journalist Martina Hansper published the official recipe of this particular and popular fruitcake. She then launched a liveblog where the audience was invited to present alternative recipes, different plating techniques, and other equivalent strategies in an engaging atmosphere. 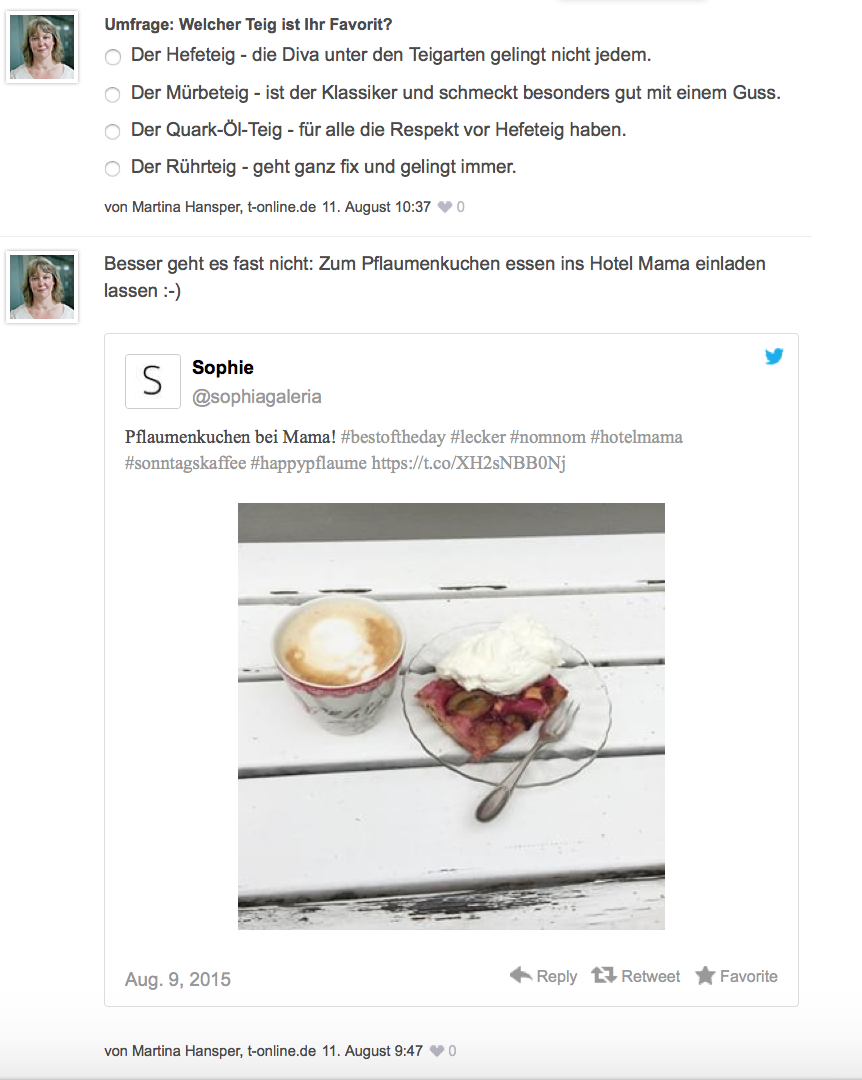 The German state of Bavaria is very proud of their beers. The local newspaper Nordbayerischer Kurier organized a second screen blog supporting the tv show How Good Is Our Beer?. This coverage had two primary goals:

Four local brewers were invited to the newsroom and watched the tv shows with journalists. The entire back stage was converted for the event as the experts answered audience questions, launched polls, and commented on events as they occurred. One of the experts says: “People often say ‘I never thought how long it takes for a beer to be ready!’ The level of appreciation is always different when someone tries himself or herself to brew his/her own beer.” 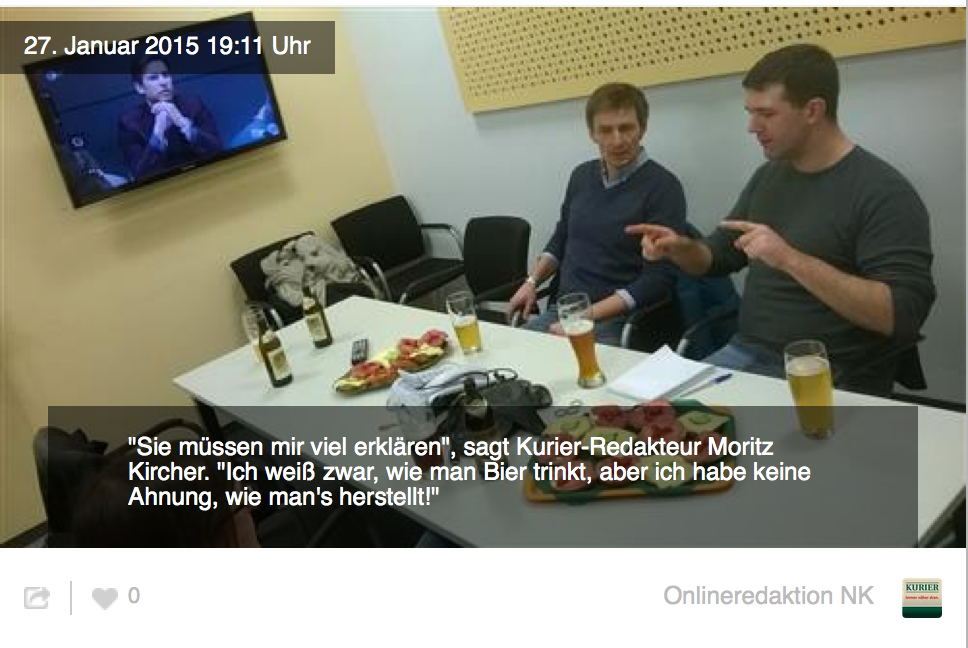 Tigros Supermercati is a supermarket chain spread in the province of Varese, located in northern Italy. Every year Tigros organizes two cooking course sessions. Each course contains 10 classes run by famous chefs. VareseNews, a popular local newspaper, covers each course from the beginning stages of shopping in the supermarket until a new recipe is delivered. The courses are attended by the subscribers of Tigros’ loyalty program. 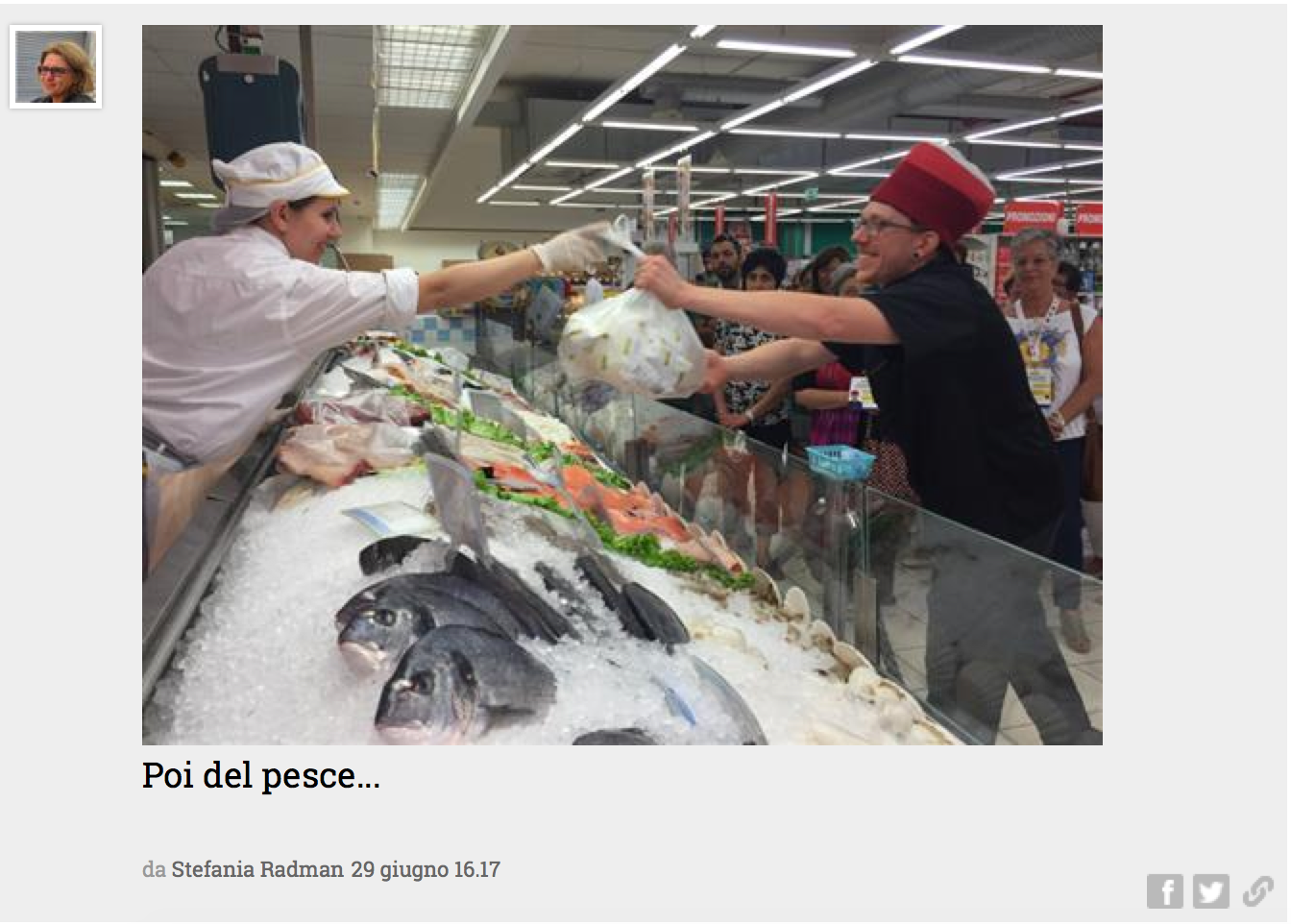 Marco Giovannelli, Director of VareseNews explained how he came up with this particular monetization strategy.

“Tigros wanted to publish traditional display advertising. I convinced them to experiment this particular form of real time branded content. We didn’t have high expectations in terms of audience. The reality is that now every class’ coverage reaches 1000 unique visitors.”

Stefania Radman, the journalist who takes care of the coverage explained how she covers the classes:

“I use Scribblelive to tell in real time what happens in the class. For the videos I use the ability to auto-post content in the stream when a video is published on my Instagram account”.

We arrive at the end of this global tour on a stop in Milano, which is hosting the Universal Exhibition of 2015. The title of this edition of EXPO is Feeding the planet, Energy for life. Once again, food is the protagonist. 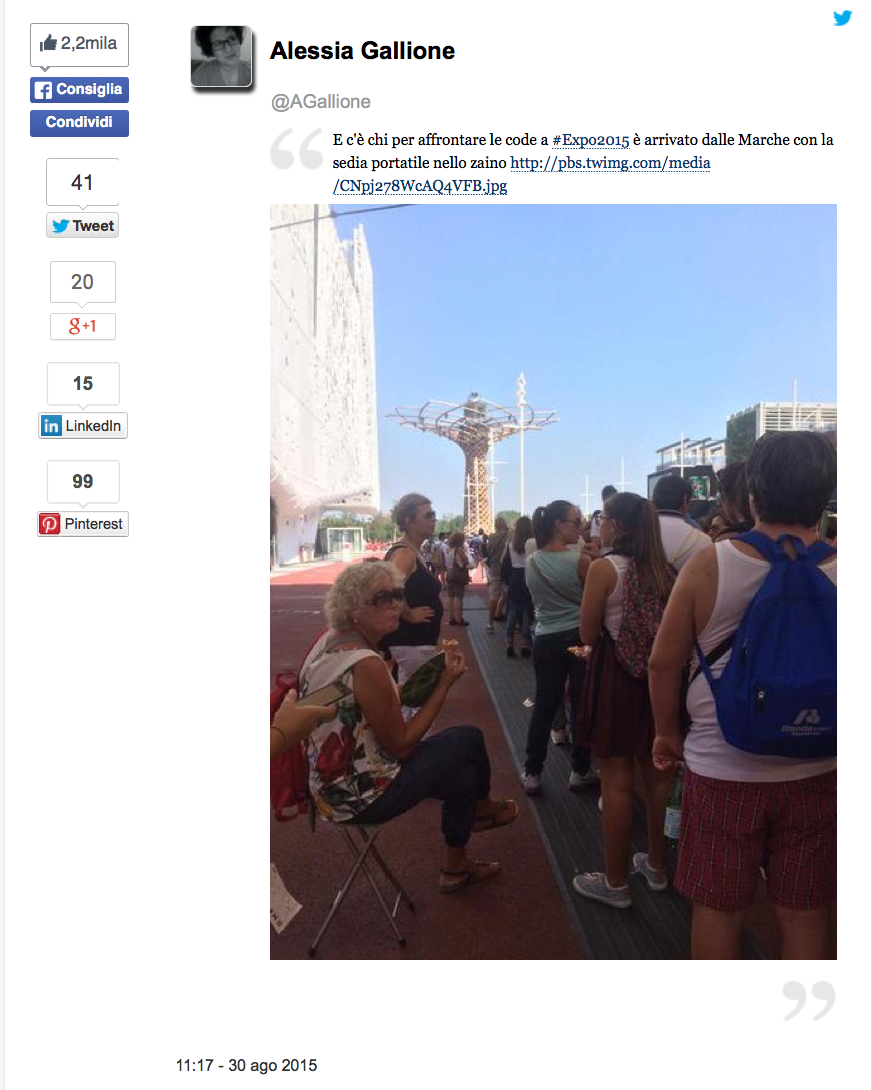 The journalists of La Repubblica, one of the most popular newspapers in Italy, will use a liveblog throughout the entire EXPO experience to publish fresh content. The queue to access the international pavilions will include politicians, experts and thought leaders discussing the growth, development and role of food in global society. The first post was published on May 1st, 2015, which was inauguration day at the fair. From inauguration day until the close of the expo on October 31st, editors in the newsroom are curating tweets from reporters on the ground to create a real time diary of the event. 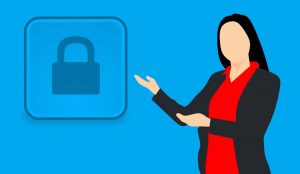 Cookin’ Up A New Content Strategy: A Quick Intro to Micro-Moments