October is a month for spooks. Trees lose their leaves and look creepy. Pumpkins ripen and are carved into glowing-grin monsters. Dead people become undead.

Zombies capture the imagination because of their apocalyptic potential. In addition to the world being swept by a virus killing everyone we know and hold dear, and destroying civilization due to massive fatalities, those dead people turn into ravenous flesh-eating undead monsters. What better time to learn more about zombies than now? Here are 19 infographics about them.

1. Let’s start with the basics. These Zombie Venn Diagrams cover some of the simplest information about zombies.

2. As fictional creatures, zombies were first seen in folklore, then made their way into popular culture through books and movies. The Evolution of the Zombie in Cinema touches on their major roles on the silver screen.

3. That history has influenced current movies, but they also draw from other genres, as Movies That Influenced Shaun of the Dead shows. 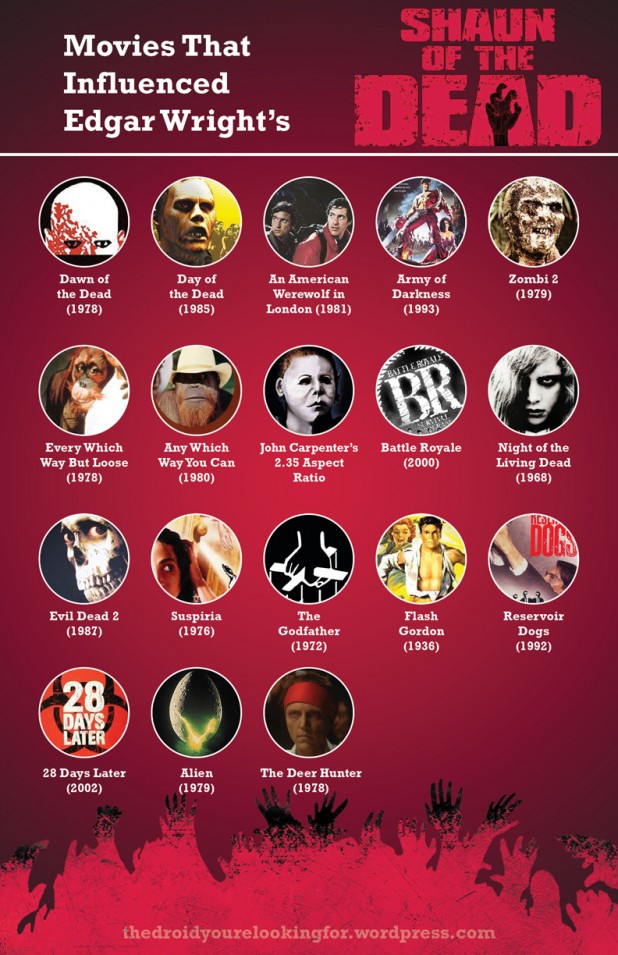 4. Movies aren’t the only place for zombies. Television shows have been infected too. Luckily, Rick Grimes has killed 50.6% of them. 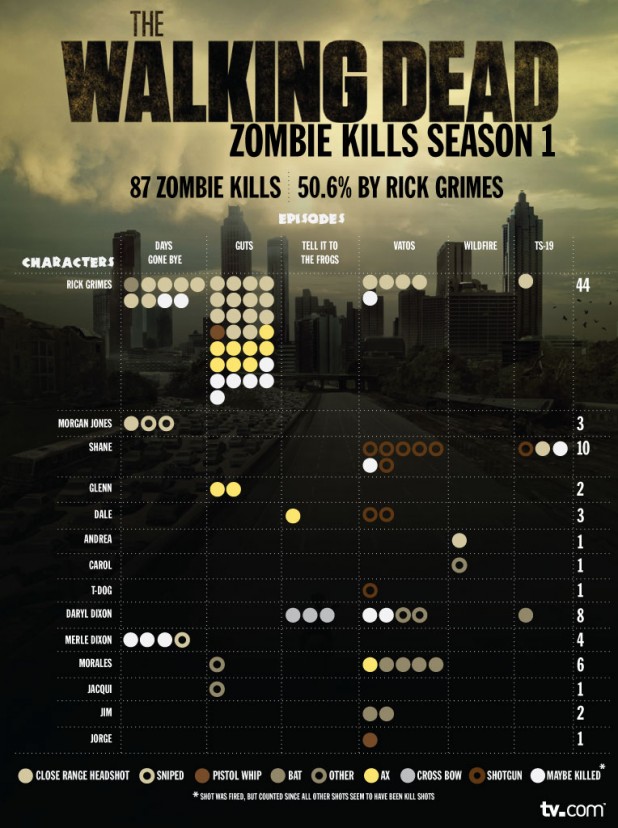 by cobradave. Learn about infographic design.

5. Part of zombie lore involves The Zombie Walk. These flash mob celebrations have cropped up as way for people to practice running from zombies.

6. Let’s get down to business now. What you really need to know is how to survive. So, How Dangerous is a Zombie? 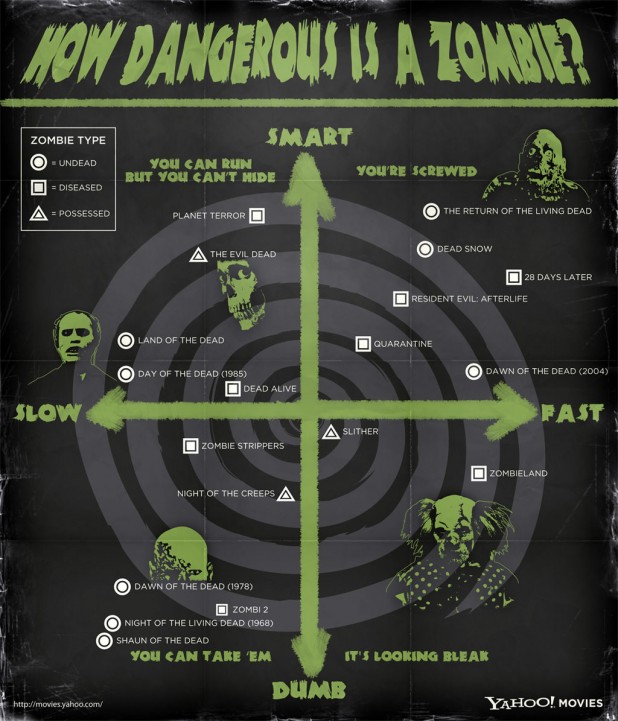 7. How Fast would a Zombie Epidemic spread if it started in South America?

8. It is also important to know the likely places an attack will start. The Zombie Map of the World shows where they are referenced in Google Maps. 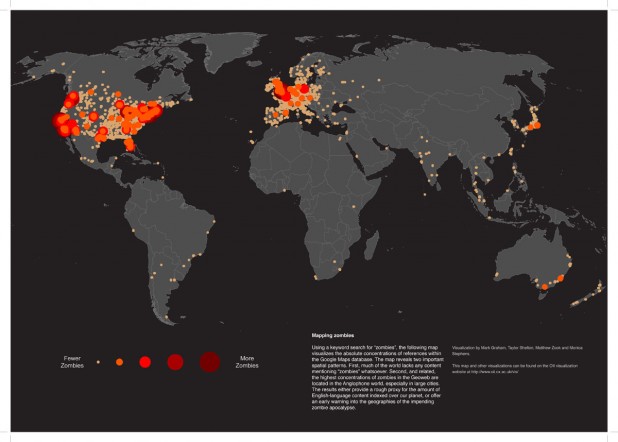 9. Typically people travel during the zombie apocalypse, perhaps because they don’t like seeing familiar places destroyed and overrun with walking dead. If you decide to stick around, though, you’ll need A House Fit for a Slayer 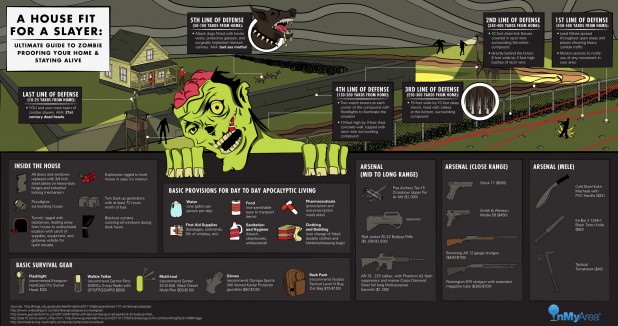 10. It appears that you may have a good chance at surviving a zombie apocalypse if you’re a Student Affairs Professional.

11. If you aren’t so lucky to have a profession like that, the next eight infographics will help you get by. Having a Contingency Plan is key.

12. If you’re lucky enough to experience an isolated attack, 3 Steps To Surviving Infestation is what you need. 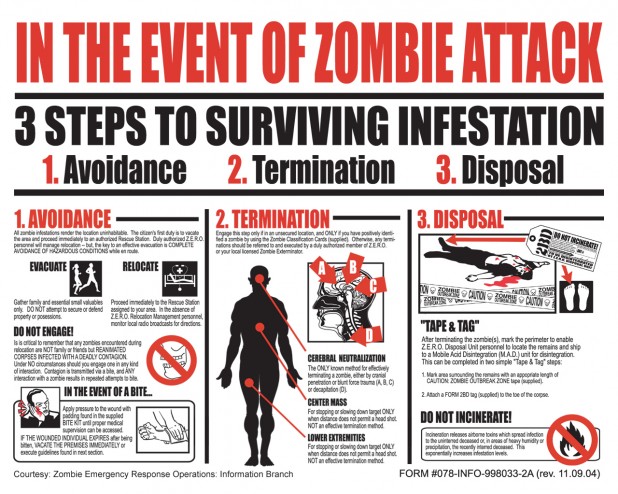 13. For skills and equipment to stock up on, How to Survive a Zombie Apocalypse is a good resource.

14. If you speak Spanish instead of English, there are infographic guides for you, too. Cómo Sobrevivr a un Ataque de Zombies covers some basics (Costco fixes everything). 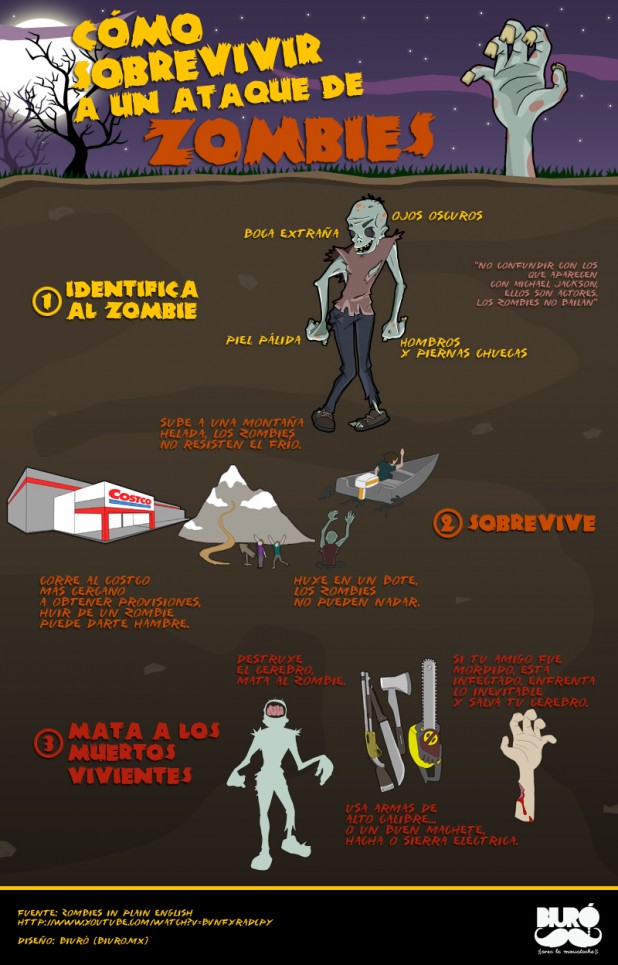 15. Sobrevivendo a um Ataque Zumbi goes into a little more detail about what to do.

Check out our data visualization blog.

16. And if you speak Portugese, you’re also in luck. Ideally, you would be avoiding confrontation, but sometimes that may be unavoidable. Knowing what weapons to use may be your best defense in case of a Zombie Outbreak. 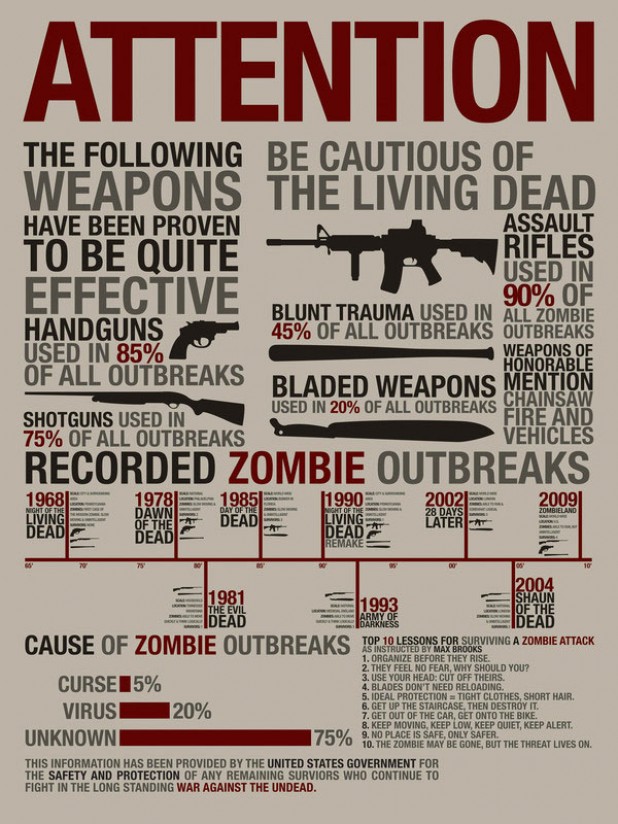 17. Knowing about the weaknesses and strengths of different zombies is also important. The Guide to Zombie Survival discusses a few different types, just be careful with those not included.

18. Last, but not least, the folks over at REI are survival experts during regular conditions and some of that knowledge translates into great Zombie Survival Gear.

19. Above all, though, remember that surviving the zombie apocalypse is a science.

Drew Skau is a brain protecting Visualization Architect at Visual.ly, and PhD Computer Science Visualization student at UNCC with an undergraduate degree in Architecture. You can follow him on twitter @SeeingStructure

How to Make a Personality Quiz Your Audience Will Love 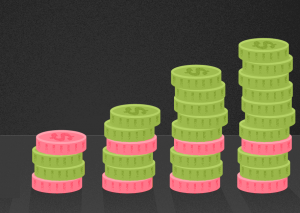 Digital Marketing ROI: what is and how to calculate it