Ben Horowitz is a startup founder and VC expert. He has invested in the next generation of leading technology companies, including Airbnb, Facebook, Pinterest, and Twitter.

A few years ago, interviewed about leading startups, he was asked about companies insisting that products are the only thing that matters.

The idea behind a strategic (or business) narrative is insanely simple: why not applying principles of storytelling, the same principles that have been repeatedly used for crafting stories behind books, films, and video games, to business and strategy?

Now that we have seen how the classic storytelling model works for movies and literature, let’s apply it to business!

A few authors and storytellers have used customized approaches. Let’s look at three models, respectively the ones of Donald Miller, Robert McKee, and Andy Raskin.

Donald Miller, who founded a company called StoryBrand, has streamlined storytelling into a process called the StoryBrand 7-Part Framework (also known as SB7).

Using the SB7 framework, companies will be able to create a brand story and then draw on its ideas to write copy and content.

Here is a brief summary of the seven principles or steps in the StoryBrand framework:

The second model analyzed is the one presented in Storynomics, by Robert McKee.

McKee, legendary Hollywood screenwriting coach, lecturer, and script doctor, has expanded his teaching focus to include content he and Tom Gerace, CEO of Skyword, have created specifically for marketing, advertising, and sales leaders.

He and Gerace teach a seminar and have written a book called Storynomics: Story-Driven Marketing in the Post-Advertising World. He lays the 8 stages of story design out in his book.

The book’s essence is the application of McKee’s model of Hollywood film plot development to marketing.

The model, explained initially in McKee’s 1997 book Story and repeated in Storynomics, is that the plot begins when an inciting incident throws the protagonist’s life out of balance.

To restore balance, the protagonist undertakes a quest for an object of desire.

The movie depicts the quest, in the face of numerous obstacles, usually of increasing difficulty, to grasp the object of desire. The plot culminates when the quest is fulfilled or fails.

His clients include venture-backed companies and some large enterprises.

I first came across Andy when he posted an article in 2016 called ‘The Greatest Sales Deck I’ve Ever Seen. It’s Zuora’s and it’s brilliant. Here’s why.’ That post has today several million views.

I had the chance to personally interview Andy a few months ago, and he was keen enough to share his story and methodology.

Andy calls the strategic narrative “the story in buyers’ heads”.

His methodology is a super-simplified (which is not a negative statement) version of McKee’s Story model — Andy clearly mentions McKee’s books as his main inspiration after failing with a VC pitch several years ago.

1. Name a Big, Relevant Change in the World

Don’t kick off a sales presentation by talking about your product, your headquarters locations, investors, clients, or anything about yourself.

Instead, name the undeniable shift in the world that creates both:

2. Show There’ll Be Winners and Losers

Demonstrate how the change you cited above will create big winners and big losers.

Adapting to the change you cited will likely result in a highly positive future for the prospect.

It’s tempting at this point to jump into the details of your product or service.

Resist that urge. If you introduce product/service details too soon, prospects won’t yet have enough context for why those details are important, and they’ll tune out.

Instead, first, present a “teaser” vision of the happily-ever-after that your product/service will help the prospect achieve — what Andy calls the Promised Land.

The Promised Land should be both desirable (obviously) and difficult for the prospect to achieve without outside help.

You will introduce features as “magic gifts”, for overcoming obstacles to the Promised Land.

When introducing products or services, we should do so by positioning capabilities as “magic gifts” for helping your main character (prospect) reach that much-desired Promised Land.

5. Present Evidence that You Can Make the Story Come True

The last piece of the pitch is the best evidence you can offer that you can make the story you’re telling come true.

By far, the most effective type of evidence is a success story about how you’ve already helped someone else (who is similar to the prospect) reach the Promised Land.

In the last piece, we will present a simple model to build a strategic narrative for your brand, using a combination of the three methodologies seen today.

Next episode: Combining All Models 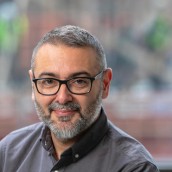 Use the Science of Emotion to Write Better Headlines

Designed For Greater Things: How To Define A Marketing Strategy For The Present And The Future